Debate: Is Ukraine a Hub for International White Supremacist Fighters? 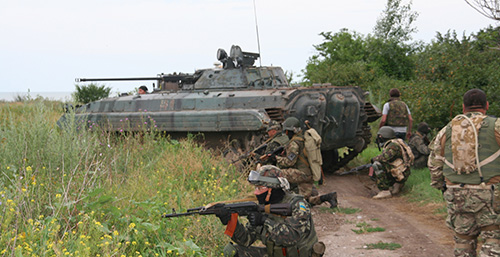 Has the conflict in eastern Ukraine become a training hub for violent white supremacists? Researchers generally agree that, beginning in the spring of 2014, some of Ukraine’s so-called volunteer battalions served as magnets for adherents of far-right ideologies, drawing foreign fighters from all over the world to the war in Donbas. Huseyn Aliyev, a lecturer at the University of Glasgow, argues, however, that when Ukraine began disbanding paramilitary groups and integrating them into official forces, taking part in the conflict became significantly more difficult for foreigners and resulted in an outflow of foreign fighters. Two other analysts, the Soufan Center’s Mollie Saltskog and Colin P. Clarke, argue that Aliyev’s depiction downplays the ways in which behavior by parties to the conflict in eastern Ukraine facilitates the rise of a serious global threat: Foreigners, they write, “are still networking, training and fighting on both sides of the conflict … cultivating skills and connections” that strengthen transnational white-supremacy extremist networks. Policymakers, they say, must work to mitigate both “the immediate dangers posed by radicals with battlefield experience and the threat that comes from Ukraine's new significance as … a hub for far-right groups to network and exchange expertise.”

Is Ukraine a Hub for International White Supremacist Fighters?

The start of armed conflict in eastern Ukraine in 2014 led to the emergence of over 40 pro-government volunteer battalions fighting on Kyiv’s side. The inability of the Ukrainian armed forces—plagued by corruption, low conscription rates and lack of funding—to halt advances by pro-Russian separatists in some of the initial phases of the conflict were among the key factors behind the rise of these paramilitary battalions. While some of them lacked a distinct political ideology, others were offshoots of far-right and ultranationalist groups, which functioned as skinhead gangs or football hooligan clubs in pre-Maidan Ukraine. My research indicates that almost from the start of armed conflict in the Donbass in spring 2014, some of Ukraine’s volunteer battalions served as magnets for neo-Nazis, white supremacists and other adherents of far-right ideologies who traveled from all over the world to join the fighting. However, this soon became considerably more difficult: Starting as early as in late 2014, Ukraine’s process of disbanding paramilitary groups and integrating them into official forces resulted in an outflow of foreign fighters even as claims that the volunteer battalions remained a magnet for white supremacists persisted into 2019 (see examples here and here). That said, there is evidence that a small number of Western white supremacists are still trying to go to Ukraine to fight—perhaps unaware of the changes on the ground—and that ties between Ukrainian and Western far-right groups persist in the form of direct communication and visits to each other’s countries.

Rebuttal: Ukraine Is Emerging as Critical Node for White-Supremacy Extremists

In his recent article “Is Ukraine a Hub for International White Supremacist Fighters?” Huseyn Aliyev argues that the phenomenon of foreigners traveling to join the conflict in eastern Ukraine has died down since late 2014, largely due to Ukraine’s process of disbanding paramilitary groups and integrating them into the country’s official security forces. He strongly suggests that the threat posed by neo-Nazis and others with far-right views who have connections to Ukraine is overblown. The Soufan Center’s research, to which both authors of this rebuttal have contributed, suggests the opposite. We find that foreigners are still networking, training and fighting on both sides of the conflict in eastern Ukraine, cultivating skills and connections that strengthen the transnational white-supremacy extremist networks of today—which, though far from monolithic, are more violent, more organized and more capable than even five years ago. By focusing on the waning number of foreign ultranationalist fighters present in Ukraine, Aliyev downplays both the immediate dangers posed by radicals with battlefield experience and the threat that comes from Ukraine's new significance as what we believe to be a hub for far-right groups to network and exchange expertise. Just as Salafi-jihadists have used conflicts in Afghanistan, the Balkans, Chechnya, Iraq and Syria to gain combat experience, so too do white supremacists use Ukraine as a battlefield laboratory in the present day. And as the conflict in Afghanistan gave birth to a transnational Salafi-jihadist organization, al-Qaeda, with members of different nationalities, so too could the dynamics of the Ukraine conflict enable a right-wing equivalent, in our view.

This piece is a response to “Rebuttal: Ukraine Is Emerging as Critical Node for White-Supremacy Extremists” by Mollie Saltskog and Colin P. Clarke. I will use this opportunity to restate my earlier argument, which I will support with further evidence. I would also like to emphasize a few factual errors and inaccuracies in the report by Saltskog and Clarke, the clarification of which is likely to weaken and undermine their arguments.

Notwithstanding the rise of far-right activism in Ukraine after the Maidan Revolution, I do not believe that Ukraine currently serves as a hub providing international white supremacists with “military training” and “battlefield experience,” as argued by Saltskog and Clarke. My argument rests on two assumptions. First, the “legalization” of foreign fighters in Ukraine has made it increasingly hard for foreigners with no language skills or previous history of residence in Ukraine to serve in the Ukrainian armed forces. Saltskog and Clarke cite an interview with Azov’s spokesperson Olena Semenyaka, where Semenyaka lists challenges for foreigners willing to join Azov and admits that opportunities for foreign nationals to serve in the Azov regiment are extremely limited. There are no volunteer battalions currently operating independently from the Ukrainian armed forces, without a formal status with either the Ministry of Interior or Ministry of Defense. Indeed, individual cases of alleged foreign white supremacists currently or recently serving in the Ukrainian armed forces have been reported. However, these cases—some of which were listed in the piece by Saltskog and Clarke—detail no more than five instances of foreign far-right activists serving in Ukraine, which hardly justifies the use of the term “hub.” Even the situation in Ukraine at the height of armed conflict in 2014-15 cannot be compared with the inflow of foreign radicals to ISIS and al-Qaeda, as only about two dozen alleged far-right and white supremacist volunteers were present in Ukraine at any time during the conflict.