Russia’s ‘Neo-Imperialism’ Is a Product of Complex Factors 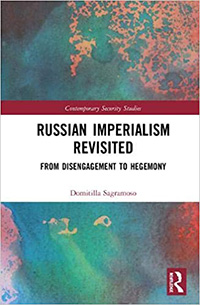 Since Russia’s intervention in Ukraine, there has been no shortage of commentaries, articles, papers and entire volumes by Western academics, think-tankers, former policy practitioners and journalists on how Russian President Vladimir Putin is rebuilding the Russian empire or how the Kremlin has never actually stopped building one. Even trying to skim all these books (which I have to in my line of work) could easily become overwhelming. As I have discovered since 2014, there are many more individuals claiming to be experts on the drivers of Russia’s actions in Ukraine and elsewhere than I could have ever suspected in previous years of writing and reading about post-Soviet Eurasia.

Still, there are some books on Russia’s external policies that I could not have missed, and “Russian Imperialism Revisited” by long-time Russia scholar and lecturer at King’s College London’s Department of War Studies Domitilla Sagramoso is one of them. Yes, some career Russianists may have had a hunch about her book’s main argument, that Moscow did not set out to restore its influence over former Soviet republics right after the demise of the USSR in 1991, but that it eventually began to do so and that this process accelerated soon after Vladimir Putin’s ascent to the presidency on Dec. 31, 1999. However, Sagramoso’s “Russian Imperialism Revisited,” which argues that Russia’s “neo-imperialist policies became prominent during the mid-to-late 2000s, as disappointment with the West grew,” is still a must read and a must keep for at least four reasons, in my view.

First, Sagramoso explains Russia’s policies toward its neighbors not just in terms of agency, as some of the harshest critics of Putin in the West have done time and again, with some largely blaming the Russian leader’s aggressive steps on a single facet of his character acquired in his juvenile years on the streets of Leningrad. Rather, she explores structure for clues behind some of the most forceful moves ordered by the long-time leader of Russia, such as the annexation of Crimea and the intervention in Syria.

Second, the author adopts a holistic approach toward explaining these polices by looking not only at the security and military drivers of what she sees as Russia’s neo-imperialism, but also detailing the energy, trade and investment factors behind this policy. Despite spending much of her long and illustrious academic career exploring the security and foreign policies of post-Soviet Eurasian states, Sagramoso does a commendable job of explaining the economic foundations of Russia’s efforts to reintegrate its post-Soviet neighbors. In fact, of all recent volumes by scholars of post-Soviet Russia that I have read so far, hers is perhaps the most comprehensive in first identifying the panoply of factors that have led to Russia’s “imperialist relapse” and then detailing how they evolved. Sagramoso has been researching Russia for almost 30 years and it shows in this book.

Third, the author has proved to be meticulous in cataloguing and analyzing all the major events in Russia’s dealings with other ex-Soviet states since the demise of the USSR, so her book can serve as a quality reference book for those wishing to refresh their memories about the timeline of Russia’s relations with its neighbors. Moreover, while some volumes on Russia’s policies in the post-Soviet neighborhood written by Western authors suffer from overemphasizing the centrality of Russia’s relations with the West, Sagramoso spends considerable space analyzing Russia’s interactions with China in that neighborhood since the end of the USSR, which is important, if only given China’s rise to the status of one of the world’s two superpowers.

Fourth, but not least, for anyone who has studied the ways Russian leaders formulate and advance national interests, it could be refreshing, if not a relief, to see a volume that makes a persuasive, fact-based argument that Russia’s moves “reflect a combination of legitimate state interests, enduring Soviet legacies and genuine concerns over events unfolding along Russia’s borders” rather than explaining everything by the “evil nature” and/or “hunger for land” of its contemporary leadership. It follows from Sagramoso’s argument that the tone of Russia’s policy toward its neighbors may have been different if Putin were to have been replaced by a different person in the Kremlin, but the substance of that policy would not have been fundamentally different. I cannot agree more with that proposition. It was also refreshing to see that the author took a solemn view of Boris Yeltsin’s presidency, which some Western-based Russia watchers tend to view with rose-colored glasses. Her description of Yeltsin’s increasing inability to govern Russia toward the latter days of his rule was spot on, in the view of the author of this review, who spent 15 years covering Russia as a journalist from 1993 to 2008.

Of course, no book is without flaws and this one is not an exception.  For one, the book would have benefited from a more thorough description of the author’s methodology and choice of sources used to back her propositions. While the author has consulted a variety of primary sources for her book, including numerous Russian-language resources, she occasionally relied on secondary sources for assessments of the economic components of Russia’s national power in the chapter on the Eurasian Economic Union. The book would have also benefited from anecdotes about specific episodes in Russia’s relations with its neighbors, which would have made the narrative livelier. Finally, the book also contains a few typos that one would have expected editors of a respected publishing house such as Routledge to have caught. Hopefully, these issues will be addressed in a second edition of the book, whose research period ends in 2017, leaving more recent developments in Russia’s polices toward the post-Soviet neighborhood unaddressed. Our knowledge of these developments would benefit from Sagramoso’s take, such as what the exposure of Russia’s equidistant approach toward the warring sides in the renewed conflict over Karabakh and its tolerance of Turkey’s involvement in that conflict tells us about Russia’s supposed neo-imperialism.

Simon Saradzhyan is the founding director of Russia Matters.