“A State of Mind: Faith and the CIA”
By Rolf Mowatt-Larssen
BookBaby, May 2020 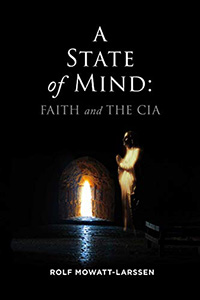 Rolf Mowatt-Larssen’s “A State of Mind: Faith and the CIA” offers an engaging, if eccentric, memoir from a man who battled some of America’s greatest post-World War II enemies, from the Soviet Union to al-Qaida, and who also knew and worked with many of the important figures of our time.1

Again and again, Mowatt-Larssen finds himself at the hinges of history. He was in Moscow in October 1993, when Russian President Boris Yeltsin ordered the Russian Army to shell and storm the parliament (and he had to be rescued from the U.S. ambassador’s residence of Spaso House, where, as he recalls, he and colleagues came under fire and felt that they were outgunned, requiring an SOS call to Sergey Stepashin, then first deputy head of the KGB’s successor organization). At a state dinner in Oslo on Nov. 1, 1999, he witnessed U.S. President Bill Clinton pull Palestinian political leader Yasser Arafat aside and whisper to him, “Take it. Take the deal. This is your last best chance for peace.” In the fall of 1999, he had dinner in New York with John O’Neill, the FBI counterterrorism expert, who told him an al-Qaida attack was imminent; O’Neill was so convinced of the danger to the World Trade Center that he quit the FBI to become its chief of security in August 2001, and perished on Sept. 11 saving lives. In December 2001, Mowatt-Larssen flew halfway around the world with then-CIA director George Tenet for one meeting—to warn Pakistani President Pervez Musharraf that al-Qaida and Taliban leaders had met with Pakistani nuclear scientists in a possible bid to gain nuclear weapons. (Musharraf’s assurance that he had “spoken with [his] top nuclear man, Dr. Abdul Qadeer Khan” and there was nothing to worry about, is harrowing.) Throw in the odd car crash or car bombing, and this is a recounting of an exciting life.

For most readers of this website, the final half of the book covering “the hunt for al-Qaida WMD [weapons of mass destruction]” and “living in the age of the super-enabled individual” will be of greatest interest. Mowatt-Larssen was thrown into these problems with little direct experience and no time for training, having spent his career in western Europe and Russia, but in the frantic days after Sept. 11, it was “all hands on deck!” His most important lesson was one of his first in the new role tracking al-Qaida’s WMD programs. A U.S. expert said to him, “We make nuclear weapons for a living. Take it from me. Anyone who tells you that it’s easy for terrorists to build a nuclear weapon is wrong. Anyone who tells you it’s impossible for terrorists to build a nuclear weapon is dead wrong.”

Mowatt-Larssen is particularly good at recreating the gut-wrenching fear and disarray that pervaded the U.S. government as he accepted his new assignment chasing al-Qaida’s WMD programs. Tenet told him:

Tenet: “We’re behind the eight ball. Bin Laden might have acquired nuclear weapons already. We can’t exclude it. You’ll have to hit the ground running and figure out what these guys are up to. . . . Take some time. But [h]urry. Figure out what you need. [Deputy Director for Operations James] Pavitt will give you everything you ask for. Give him a list. Don’t hold back. . . .”

Mowatt-Larssen: “How many people do I have going into this effort?”

Mowatt-Larssen also recounts thoughtful and nuanced discussions among senior officials of the controversies that beset U.S. intelligence operations in the 2000s, from waterboarding, to drone strikes, to domestic surveillance, even to whether or not the concept of a “Global War on Terror” was useful. He and his colleagues may not have always produced the right answers, but more often than they are usually credited, they asked the tough questions. The problems they faced were hard, and the stakes were high.

A surprising leitmotif of the book is honesty, and how often it works. Again and again Mowatt-Larssen deploys complete candor in surprising situations to his benefit. After a car crash in Germany as a young army officer, he admitted to his commander that he was drunk, probably saving his career, as honesty counted more than judgment. Early in his CIA career, he told his station chief that he had violated a direct order not to visit a friend injured in a car bombing, with a similar result.

Arriving in one of the “Stans” after the break-up of the Soviet Union, to set up a CIA station, he called the local leader’s office and announced, “Hello. My name is Rolf Mowatt-Larssen. I’m a CIA officer. I’d like to place a courtesy call to introduce myself to the President.” A meeting with hard-faced, but ultimately friendly men followed. In response to Russian FSB Lt. Gen. Valentin Klimenko’s urgent question about why U.S. intelligence officers had met with rebels opposing Russian President Boris Yeltsin, Mowatt-Larssen did not dissemble, but rather replied, “The sole purpose of the CIA’s contact with the armed opposition is to gather information to keep Washington apprised of developments.” Mowatt-Larssen did so despite the fact that Klimenko was his self-described “Karla,” or his “counterintelligence nemesis.” That candor may have saved his life because, as noted earlier, Russian security services ultimately rescued him under fire at Spaso House.

Sadly, this cooperation did not last long. In Mowatt-Larssen’s telling, “the arrest of CIA traitor Aldrich Ames in March 1994 created a tsunami in U.S.-Russian relations.” As a result, “All hopes of productive liaison cooperation were dashed. The Cold War came back with a vengeance. It was a relief of sorts, for the warriors on both sides. Now we could all act on our malevolent intent without feeling any pangs of guilt for the higher interests of our two countries.” Even this sad emotion Mowatt-Larssen reports honestly.

He also detailed his honesty with U.S. allies, resolving to make no promises he could not keep, even if he rankled feelings at the time. He later found, “My resolution to be direct and honest with our partners was useful in my later years when I served as Chief of Europe and dealt with our European partners on sensitive issues.” Finally, and tellingly, he openly corrected President George W. Bush in front of U.K. Prime Minister Tony Blair, making clear that the CIA had no evidence of Saddam Hussein supporting Abu Musab al-Zarqawi prior to the Iraq War. Bush accepted the correction and Tenet supported it.

This is all more than just happenstance. Mowatt-Larssen quotes approvingly his mentor, Father Thomas, who asserts that, “Prophets are those who speak truth to power,” and it is clear that this belief guided his career, even as he got closer to ultimate power.

The book does a little score settling and contains some flaws. The friction between the Department of Defense and the CIA is evident in anecdotes about Donald Rumsfeld and Doug Feith, but those are limited. Mowatt-Larssen would have been well-served by a better editor:  West Germany was not “NATO-occupied” in 1976; Ehud Barak was prime minister, not president of Israel; the Japanese terror cult Aum Shinrikyo probably raised about $1 billion, not billions; and Aldrich Ames, a traitor to be sure, was convicted not of treason, but under the Espionage Act. These are small matters though, especially in comparison to the scale of the foes Mowatt-Larssen fought.

This is a unique espionage memoir, full of interesting anecdotes, putting operations in the context of policy and morality. It is also a candid and personal story of spiritual journey—philosophy and theology, yes, but also mysticism, dreams and prophecies. Mowatt-Larssen says he has had multiple conversations with the Virgin Mary, and the book is dedicated to her. In this sense, Mowatt-Larssen would seem to owe as much to Saint Faustina or Robert Pirsig and “Zen and the Art of Motorcycle Maintenance” as he does to John le Carre and “The Russia House.” I am not qualified to comment on these portions of the book.

Different readers will surely find different aspects of such a varied book appealing, but for my money, the best chapters are the two that recount the immediate aftermath of the Sept. 11 attacks.  Hemingway advised writers that, “All you have to do is write one true sentence. Write the truest sentence that you know.” Rolf Mowatt-Larssen has written many in his memoir, and apparently spoken even more throughout his career.

William Tobey is a senior fellow at the Belfer Center for Science and International Affairs and the director of its U.S.-Russia Initiative to Prevent Nuclear Terrorism.

The opinions expressed herein are solely those of the author.

Does the International Liberal Order Have a Future?

How to Reinvent Democracy Promotion

Did the US Government Support Chechen Separatism?

Russian President Vladimir Putin and his subordinates have claimed that the U.S. government has supported Chechen separatism, but is there evidence to back up these claims?

Most Russians See Coronavirus as Top Event of 2020, Worry 2021 Will Be Tense

From Primers on How to Manage Relationship with Russia to Lessons of Karabakh War: RM's Most Read of 2020