Partially Correct: If calculated without adjusting for inflation or purchasing power, Russia’s nominal GDP per capita (in current U.S. dollars) declined by 37.4% in 2013-2020 according to IMF data, so a 30% decline by March 2021 is conceivable; however, the decline in 2013-2020 is much smaller—less than 2%—when calculated using the IMF’s inflation-adjusted formulas, which are considered a more reliable measure of economic change over time; World Bank data show similar trends. (Fact-check completed in Fall 2021.)

Writing about the Russian state’s increasing repressiveness in FT Magazine on March 14, 2021, FT’s then Moscow bureau chief, Henry Foy, mentions almost in passing that Russia’s “GDP per capita is 30 per cent lower than in 2013.” The claim—meant, together with other data, to illustrate the costliness of Moscow’s “belligerent attitude” on the world stage—surprised us since neither Russia’s total GDP nor its population has changed so drastically in the years in question. Because the author did not specify the source of his estimate, the method by which it was calculated or the year to which he was comparing Russia’s GDP of 2013, we decided to (1) pick 2020 as the last full year for which measurements of GDP were available at the time the claim was made and (2) check measurements of GDP in 2013 and 2020 in the databases of two reputable international financial institutions, the World Bank and the IMF,1 as well as Russia’s Federal State Statistics Service (Rosstat).2

As noted by the World Bank, it is constant-price data that should be used to measure “the true growth” of a variable over time, as such data adjust for the effects of price inflation. Based on the figures below, the FT calculation of a 30% decrease in Russia’s GDP per capita seems to refer to nominal (i.e., not adjusted for inflation or purchasing power) GDP per capita and the 2013-2020 decline in this category seems driven largely by the depreciation of the ruble vis-à-vis the U.S. dollar at market exchange rates, rather than by major contractions of Russia’s economy. In short, by not providing details about the data cited, the FT’s claim may be misconstrued as an indication that Russia’s economy has shrunk by 30% since 2013—a conclusion that none of the available data support.

Table 1: IMF Estimates of Russia’s GDP per Capita as of October 2020

It is worth noting that at the time the FT article was published the World Bank had data only up to 20193 but those data showed the same basic trends as the IMF data for 2013-2020. It was clear even then that the only measure by which Russia’s per capita GDP could have declined by 30% between 2013 and 2020 was current U.S. dollars, which adjust for neither inflation nor purchasing power (see Table 2). If one controls for inflation by using constant prices pegged to a particular baseline, GDP per capita grew by about 3 percent between 2013 and 2019, according to the World Bank data. 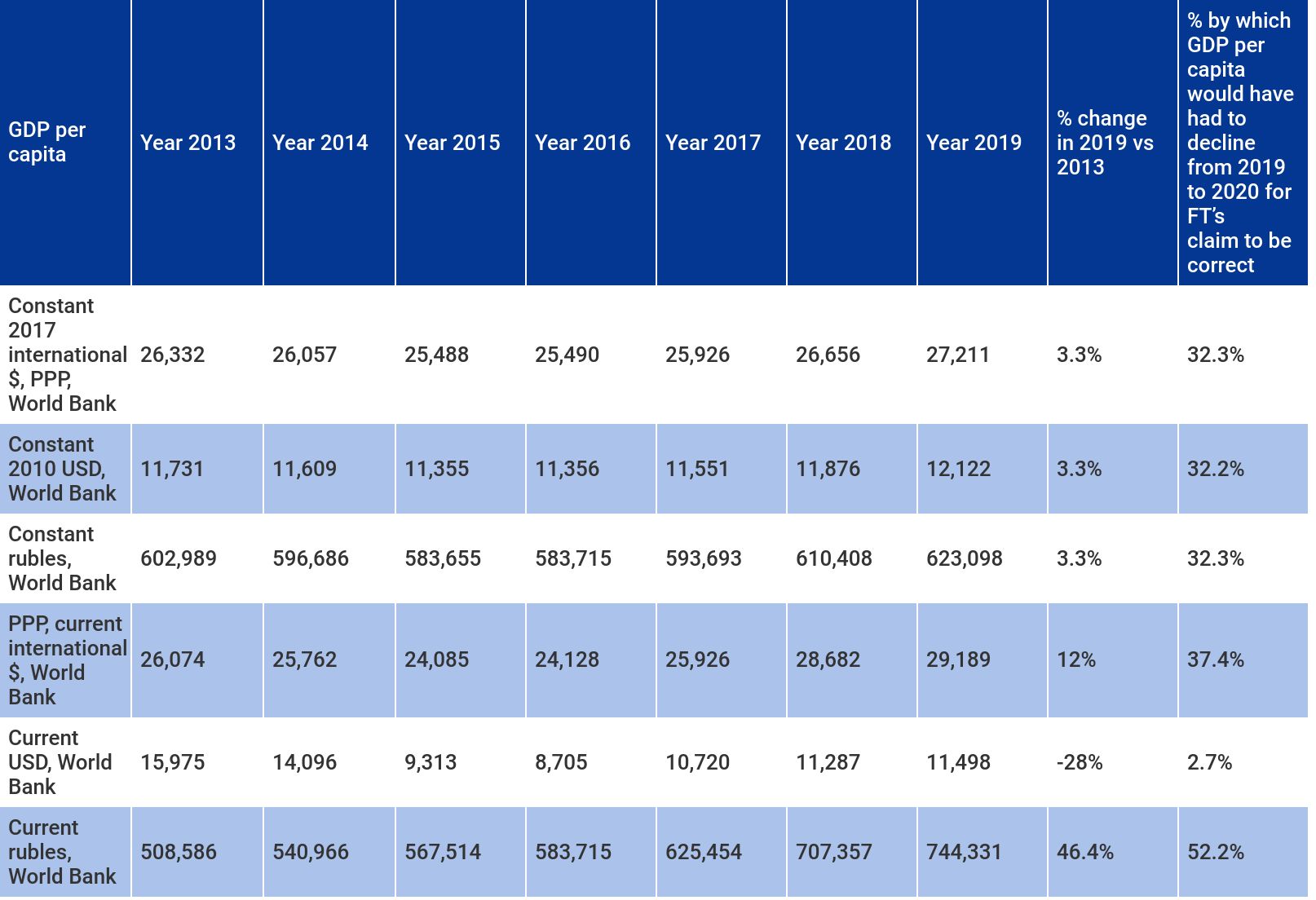