Partially Correct: Although foreign direct investment in Russia has generally been trending down since the onset of sanctions in 2014, foreigners still have an active presence in Russian financial markets as of 2020. Other indicators of investor confidence have also decreased, although the trends for these indicators are less clear: Purchases of Russian companies by foreign entities have decreased, but numbers are volatile, and while “greenfield” investment in Russia shows some growth since 2014, numbers remain well below their apex a decade ago. While some negative trends in investment can be observed in Russia, claiming that “nobody wants to invest in Russia” is an oversimplification, as many indicators show more nuanced results. (Fact check done in September 2020.)

Source of the claim: Vladislav Inozemtsev, as quoted in the New York Times (February 2020)

In an article published Feb. 18, 2020, by the New York Times, Vladislav Inozemtsev, the director of the Center for Post-Industrial Studies in Moscow, was quoted as saying that “nobody wants to invest” in the Russian economy. He explained that “nobody believes the economic situation will be better tomorrow than it is today.” Inozemtsev’s comments imply that while the Kremlin has worked to make investors believe that the Russian economy is in good shape despite Western sanctions, these investors’ confidence in Russia is nonetheless low. We have decided to fact-check Inozemtsev’s claim because we believe that whether the Russian economy is perceived to be faring well and attracting investment or not is important as such perceptions are factored in when, for instance, the U.S. government assesses the effectiveness (or lack thereof) of its Russia sanctions policy.

Neither Inozemtsev nor Andrew Kramer, the New York Times journalist who wrote the Feb. 18 news story, specified whether, how or over what period of time they measured investments. To do so, we use the U.N. Conference on Trade and Development’s (UNCTAD) indicators about FDI in a country, including FDI inflows and stocks, cross-border acquisitions and announced greenfield investment projects. These indicators are comprehensive and well-respected throughout the world, and were recommended to us by Harvard economists. We also evaluate various indicators on the Moscow Exchange (MOEX) to elucidate patterns in international capital flow and investor confidence in Russian markets. We use these indicators because they present quantitative and easily comparable measures of investor confidence in the Russian economy. We also analyze data from the Organization for Economic Cooperation and Development (OECD), as this organization provides detailed and reliable data. We use the other BRICS countries (Brazil, India, China and South Africa) as comparative cases, as leading investment banks and organizations often group them together as major emerging market economies. We mainly analyze data from 2013, the year before many Western sanctions were implemented, to 2019, which was the last full year before Inozemtsev made his assessment in the February 2020 news story. We also depict some data prior to 2013 when available and applicable.

The first area that we examine is Russia’s financial markets. We find that despite sanctions, foreign investors nonetheless remain heavily involved in Russian financial markets, casting doubt on Inozemtsev’s claim that “nobody wants to invest in Russia.” 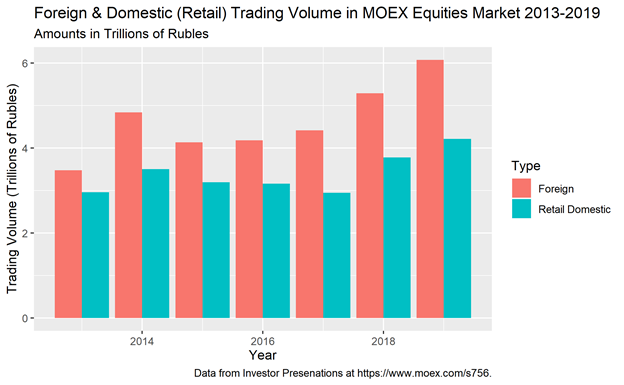 Federal loan obligations (abbreviated from Russian as OFZ) play a large role in Russian financial markets as well. The Russian Central Bank uses OFZs to finance the federal budget, while domestic banks use them as an instrument to manage liquidity. Foreign and domestic investors have seen them as an area of potential returns since the late-2000s. As of April 2019, foreign investors bought more than half of the OFZs offered by the Russian government. Fears that OFZs would be the target of new Western sanctions have not completely vanished, but have also so far failed to come to fruition.

An analysis of Russia’s financial markets, therefore, casts clear doubt on the idea that “nobody wants to invest in Russia.” Other indicators, however, as elucidated below, either are ambiguous or provide some credence to Inozemtsev’s statements.

Russia’s FDI inflow (the value of inward direct investment made by non-resident investors in an economy) has remained stagnant with a tendency toward slight decline over the past few years, as Russia has maintained fourth place among BRICS countries in yearly FDI inflow since 2014, and Russian inward FDI stock (the total value of foreign investment in enterprises resident in an economy at a given time) has shown no significant net increase over the past decade. Both FDI inflow and FDI stock trends show that foreign investors are hesitant to invest in Russia’s economy, but variation in data makes the statement that “nobody wants to invest in Russia” empirically difficult to back. While yearly FDI inflow decreased substantially in the mid-2010s, a slight uptick was observed in 2019. Furthermore, data shows that a lack of net increase in FDI stock is not unique to Russia and is affecting other large emerging economies as well.

Russian FDI inflow has declined from a high of $75 billion in 2008 to about 32.1 billion in 2019, according to data from the U.N. and the OECD. The latest data reported, from the fourth quarter of 2019, shows a quarterly inflow of $6.96 billion, a decrease from $8.1 billion in the third quarter and a slight increase from $6.8 billion in the second quarter, according to OECD data. While numbers have been relatively volatile recently, the trend for Russian FDI over the past few years is negative and clearly lower than its mid-2000s high, and it seems clear that investors are somewhat more skittish of the Russian market. This negative trend is shown below in Figure 2. 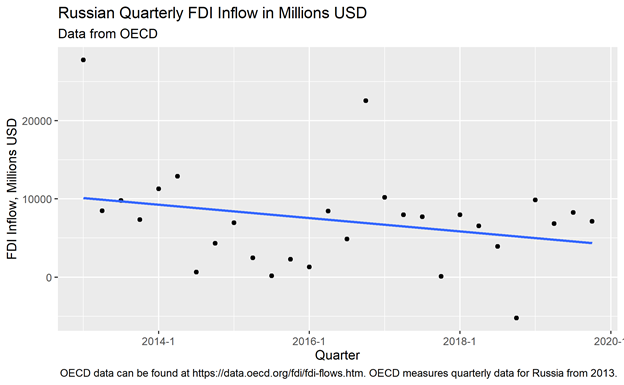 In addition to looking at Russia’s trends in isolation, it is also helpful to compare current levels of FDI inflow with its peers from BRICS. While the amount of FDI in Russia ranked second among BRICS countries for several years in the mid-2000s, both Brazil and India have since outpaced Russia in this area and have attracted more foreign investment than Russia in every year since 2014. These trends are shown in Figure 3, as Russia’s line (labeled in blue) clearly dips below those of Brazil and India. 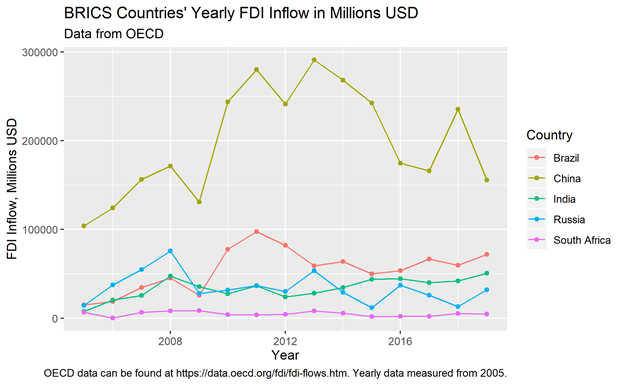 Additionally, Russia’s FDI inflow numbers are heavily influenced by “round-tripping”—Russian companies investing in Russia through offshore entities, according to a paper published by UNCTAD. This phenomenon is pervasive in all BRICS countries, but it is especially prevalent in Russia: according to a September 2019 IMF report, around 25 percent of FDI into Russia was ultimately owned by domestic investors, a figure which trails only China. The Russian government has been clamping down on some aspects of this practice, passing laws on subjects such as de-offshorization in 2015 and repatriation of Russian capital in 2018.

Moving to FDI stock, Figure 4 compares Russia’s yearly FDI stock with that of other BRICS countries. 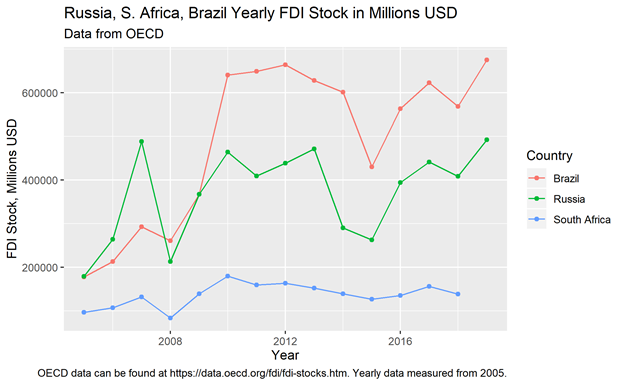 In terms of raw dollar amounts, Russia’s and Brazil’s trends are essentially identical over the past few years, and South Africa’s is quite similar. India’s and China’s FDI stocks are growing significantly faster than the other three BRICS countries’, so they are not included in the above graph. Russia has indeed had difficulty attracting new investment—over the last decade, Russia’s FDI stock has shown essentially no net growth. Again, though, this trend is not unique to Russia—fluctuations in Russia’s FDI stock trends match fluctuations in the investment trends of Brazil, the BRICS country most similar to Russia in terms of total nominal GDP. In total, patterns in FDI inflow and FDI stock do not look great for Russia, but they generally do not give the overall impression that investors are significantly less interested in Russia than in other BRICS countries.

Another indicator measured by UNCTAD, cross-border mergers and acquisitions, also reflects generally negative trends in foreign investment in Russia; however, fluctuation in yearly data renders this indicator difficult to interpret as well when analyzing Inozemtsev’s claim. Net cross-border sales, understood as sales of companies in a host economy to foreign multinational enterprises minus sales of foreign affiliates to domestic firms, declined steeply in Russia in 2019, as sales decreased from 12.5 billion in USD 2017 to 2.6 billion in 2018 and 877 million in 2019. These 2018 and 2019 figures represent a significant contraction from the 2005-2007 “pre-crisis” average of 6.7 billion USD. However, dollar amounts for mergers and acquisitions are volatile, and while these numbers appear to show a negative trend, the variation in the data makes this claim difficult to back up with reasonable confidence. 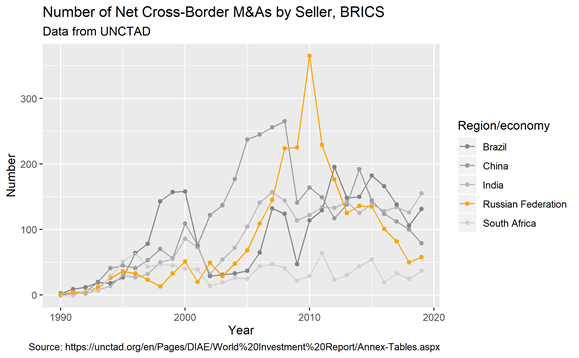 Yet while the above graph appears to show foreign companies’ loss of interest in Russia, it is unclear if this is actually the case. A report  from the Nova School of Business and Economics, a leading Portuguese business school, argues that in some large sectors of the Russian economy, such as oil and gas, most major acquisitions occurred in the first decade of the 2000s. As a result, by the 2010s, there was essentially “no one left to buy.” Furthermore, while the number of sales has indeed declined in Russia over the past few years, Russia is not the only BRICS country where this is the case. Finally, the volatile nature of sales measured in USD instead of in number clouds the picture as well. While the total number of sales has decreased over the last decade, the trend in yearly value of sales has not been nearly as linear. While cross-border acquisitions data seems to support Inozemtsev’s claim by pointing to a general negative trend in foreign investment in Russia, volatility and ambiguities in interpretation make it difficult to say for sure.

Trends in greenfield investments, or direct investments of a parent company in a subsidiary enterprise in another country, show fairly clearly that while Inozemtsev’s statement that “nobody wants to invest” is not entirely true, it is not groundless, as despite a recent rise, the trend for this type of investment is generally negative over the past decade. Looking at projects where Russia is a destination from 2016-2019, investment in new projects appears to be increasing slightly: in 2016, Russia announced 14.7 billion USD in greenfield investment projects; that number has risen yearly to 17.6 billion in 2017, 18.4 billion in 2018 and 24.6 billion in 2019. However, these numbers are still significantly lower than the 2005-2007 “pre-crisis” annual average, which UNCTAD reports as 31.2 billion USD. While the U.N. reports a slight rise of late, overall levels of greenfield investment in Russia are not where they were in the first decade of the 2000s.

Overall, while the fact that foreigners have retained an active presence in Russian financial markets makes Inozemtsev's statement incorrect, stagnant or negative trends in greenfield investments, FDI inflow and stock and cross-border M&As show that his claim is not groundless