Claim in 2019: “Real incomes [in Russia] have fallen for five of the past six years.”

Partially Correct: Of the two types of real income officially calculated in Russia for individuals, both real monetary incomes and real disposable incomes contracted in 2014-2018, according to Moscow’s Higher School of Economics. However, according to data available from Russia’s Federal State Statistics Service (Rosstat) at the time of the claim, only real disposable incomes had fallen every year from 2014 through 2018. Rosstat data published by Russia’s Ministry of Economic Development show that real monetary incomes rose in 2018, contradicting the above claim. (Fact-check done in November 2019.)

Source of the claim: The Financial Times (August 2019)

The authors of the FT article did not specify either a source for their data or how they defined real income. Our search of national and international sources of socioeconomic statistics on Russia revealed multiple references to two types of real incomes—i.e., incomes adjusted for inflation—calculated for individuals: real monetary incomes1 (realnye denezhnye dokhody) and real disposable incomes (realnye raspolagaemye dokhody). One of these sources did find a decline in real monetary incomes in the five previous years: In the Sept. 4, 2019, edition of its newsletter “Commentaries on the State and Business,” the Center of Development Institute at Moscow’s Higher School of Economics included a chart, translated and copied below (Chart 1), with its own calculations of real monetary income that showed a decline in 2014-2018 (not a single data point falls above zero). However, it is important to note that the center’s findings were released after the FT claim was published. The newsletter’s author, Svetlana Misikhina, notes that these figures were calculated using Rosstat’s “old” methodology, which was replaced with a new one in the spring of 2019. 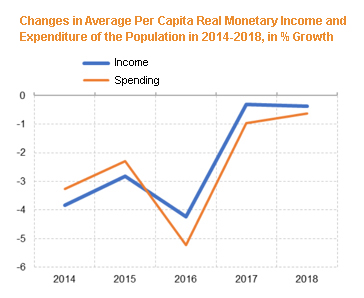 Finding figures for real monetary incomes in Russian government sources is trickier. Rosstat only began publishing the metric this year, on a quarterly basis, and the Ministry of Economic Development, which oversees the agency, released retrospective real-monetary-income data for 2016-2018 in August (see chart below). According to these calculations, based on Rosstat data, real monetary incomes fell in 2016 by 4.5 percent and in 2017 by 0.7 percent but rose in 2018 by 1.1 percent. (According to Rosstat data for 2019, real monetary incomes fell by 0.4 percent in January-June as compared to the first half of 2018 but rose by 0.9 percent in January-September as compared to the same period the year before.)

Prior to 2019, the main inflation-adjusted income statistic measured and reported by Rosstat had been not real monetary income but real disposable income, which is inflation-adjusted income after “mandatory payments” like food, shelter and taxes.2 This tradition was clearly reflected in journalists’ work: Half a year before the FT’s claim, various reputable Russian-language media—including RBC, Vedomosti and the BBC’s Russian service—published stories with headlines saying that Russians’ “real incomes” (or just “incomes”) had fallen for a fifth year in a row. While the Russian stories did refer to the statistics on “real disposable income” lower down, their headlines and opening paragraphs suggest that the two statistical terms were used almost interchangeably. Perhaps the FT simply did the same, without pointing out that “real incomes” actually meant “real disposable incomes”?3

In any case, the claim that Russians’ real disposable incomes had declined for five years in a row would have been correct in the summer of 2019. In June Rosstat had published data (see Chart 2 below) indicating that real disposable incomes had declined every year from 2014 through 2018, including a 0.1 percent year-on-year drop in 2018. HSE’s Sept. 4 newsletter showed the same trendline. Official data published more recently, in October 2019 (after the FT’s claim), indicate slight growth in 2018—both for revised real disposable incomes and the new real income measure. This seemed to match some economists’ perceptions of the reality on the ground, but whether the changes came from new econometric data or methodological tweaks is not clear. 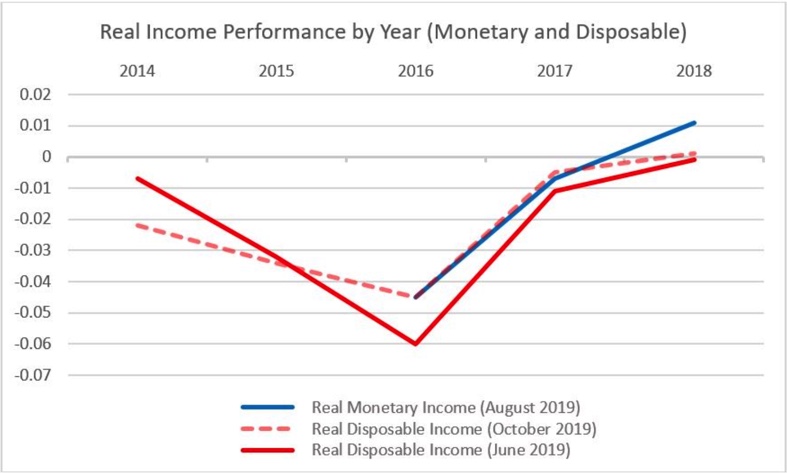 Data from international organizations do not shed much light on real incomes in Russia. The International Monetary Fund's databank does not provide individual- or household-level income data, and the IMF’s August 2019 country report on Russia says only that “per capita income” has declined “relative to EU new member states … in recent years,” without providing any figures. The situation at the World Bank is similar: Though the organization collects robust data on inequality, measures of real income for individuals and households are not among the indicators in its databank. The Organization for Economic Cooperation and Development has collected statistics on Russia's household disposable income, but this is not an inflation-adjusted measure and the most recent data available is for 2015, when the OECD registered a 7.1 percent drop after three years of growth.

For further context, Rosstat has been the subject of some debate in the last few years, after being returned to the Economy Ministry’s control in 2017. Critics charge that the statistics agency faces perverse incentives to perform statistical sleights of hand by operating under a ministry tasked with boosting economic performance—one with a traditionally rosier outlook than the Ministry of Finance. Early this year, for example, Rosstat faced a barrage of criticism for claiming the economy had grown at the fastest rate in six years in 2018. More recently, the agency published data indicating that 2019 third-quarter real disposable income growth (year on year) reached an impressive 3 percent and the overall economy grew by 1.7 percent, again leaving economists and Russian-economy watchers skeptical. While it’s difficult to be sure about Russian income statistics, there is little doubt that more of them will need fact-checking in the foreseeable future.

1Monetary income (denezhny dokhod) as defined by Russia’s official statistics agency does not include employer-provided benefits such as insurance; U.S. measures of personal income do include such supplements. In Russia, employer-provided services are included in a measure called “gross household income” (valovoi dokhod domashnikh khozyaistv).

3On June 28, 2019, the Financial Times’ editorial board made a similar claim, writing that “real household incomes [in Russia] have fallen five years in a row.” In a Nov. 22, 2019, article a Moscow correspondent for the newspaper wrote that “real incomes [in Russia are] in their sixth year of decline.”