Correct: When measured in current U.S. dollars, Russia’s 2017 GDP was only slightly larger than South Korea’s. (Fact-check done in July 2018.)

Source of the claim: Bert Ely, principal of a financial consulting company (July 2018)

Also in July 2018, Wall Street Journal columnists Yaroslav Trofimov and Walter Russell Mead both made similar claims. Trofimov wrote that Russia “doesn’t even rank among the world‘s ten largest economies. Its GDP is roughly the size of South Korea’s,” while Mead claimed that Russia’s “gross domestic product is less than 10 percent that of the U.S. or the European Union.”

However, as we have pointed out before, there are several ways to measure GDP, and other measurements show a larger difference between Russia’s economic output and South Korea’s. GDP measured in constant 2010 U.S. dollars, also according to World Bank data, puts Russia’s 2017 GDP at $1.68 trillion, making it the 11th largest economy in the world, and South Korea’s at $1.346 trillion, making it 14th in the world (80 percent of Russia’s). GDP at purchasing power parity (PPP) shows an even wider gulf between the two countries’ economies. According to the World Bank, Russia’s GDP, PPP for 2017 measured in constant 2011 international dollars was $3.637 trillion, making it the world’s 6th largest economy; South Korea’s GDP, PPP for 2017 was 14th in the world at $1.85 trillion, or just 51 percent of Russia’s. Check out the charts below for 2017’s top 20 economies as determined by different ways of measuring GDP. 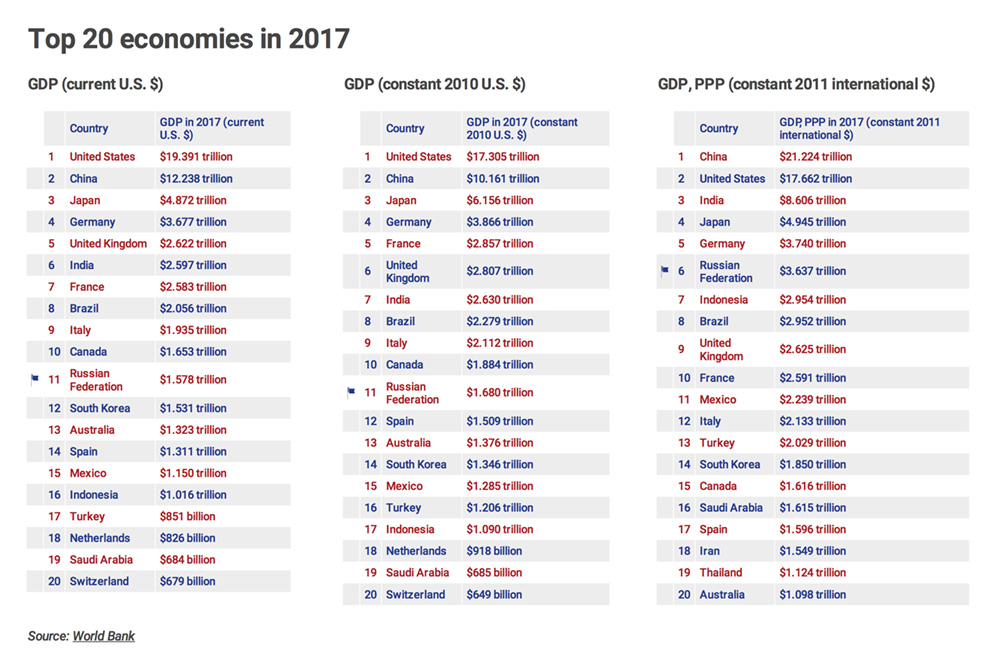