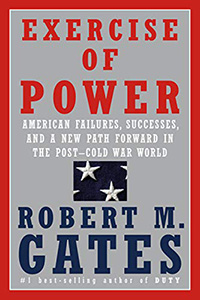 Robert Gates’ “Exercise of Power: American Failures, Successes, and a New Path Forward in the Post-Cold War World” constitutes the most coherent of recent attempts to catalogue the key instruments of modern America’s national power and then discern how the use of these instruments has evolved following the end of the Cold War and to what effect. Gates particularly excels in dissecting why, how and to what effect America has underutilized the non-military components of its power, which is all the more remarkable given that he has spent most of his U.S. government career in the American equivalent of Russia’s power agencies, such as the CIA and the Pentagon. “Answering how we got to where we are today internationally … lies also in the mistakes of post–Cold War presidents and Congresses and, in particular, their failure to recognize, resource, and use the arsenal of nonmilitary assets that proved of critical importance in the long contest with the Soviet Union,” he writes in his 2020 volume.

While post-Cold War America’s non-military tools have been underutilized, their military counterparts have been overused, constituting, among other things, mission creeps in the greater Middle East, according to Gates. “In both Afghanistan and Iraq overwhelming initial military victories were followed by political decisions that expanded the mission beyond purely military objectives to ambitious and, I believe, unrealistic nation-building,” he writes. (In doing so, the U.S., perhaps, failed to learn from its Cold War competitor’s mistakes in Afghanistan where its military contingent dedicated 60 percent of its activities to peacekeeping and nation-building in the 1980s.)

Having diagnosed the ills of America’s utilization of power on the world scene, Gates then prescribes a nuanced treatment. “To deal with the diverse challenges America faces, America must lead. But to lead, to achieve its purposes and goals, it must strengthen all the instruments of power and apply them with greater wisdom. We must use the American symphony of power to ensure that authoritarianism, twice defeated in the twentieth century, does not prevail in the twenty-first,” he writes. For employment of that power to sound like a symphony, all of its instruments need to play, including the military, diplomacy, economic leverage, cyber capabilities, development assistance, communications, intelligence, alliances, science and technology, culture, ideology, the private sector, religion, nationalism and wise and courageous leadership, according to Gates.

Gates then does a superb job of identifying key questions to which a U.S. president needs to attain reliable answers before employing the military instruments of its power to solve a problem.

To start with, he or she should ask himself or herself whether core U.S. national interests or those of U.S. allies are threatened and whether the U.S. military is the right, or optimal, solution to a problem. Other pre-decision questions should include: whether other countries are willing and able to help the U.S.; whether there is a legal basis for the use of force; whether it would be time-limited; what the cost would be in lives and treasure; what the level of support in Congress and among the public could be, both in the short-term and long-term; what the unintended consequences and collateral costs could be; and what could go wrong. When considering whether to conduct a military intervention in another country, possibly to be followed by a peacekeeping operation, the president also needs to ask him or herself and his/her aides whether internal disorder in that country threatens to spill over national borders and menace U.S. allies, whether U.S. involvement would make a difference or facilitate a negotiated outcome, what resources would be needed to achieve objectives and whether there are security guarantees from the internal factions, cooperation between parties and readily achievable mandates. “The answers to those questions might have led to different decisions in Somalia, Haiti, the Balkans, and Libya, and in both Iraq and Afghanistan after the initial military objectives had been achieved,” he notes. Gates also rightly urges U.S. leaders to be realistic about what interventions in other countries can achieve.

While Gates’ 360 degree, 30,000 foot view of American power and ways to fine-tune and employ its individual instruments is commendable, some, but not all, of his 1,000-foot views on the application of that power in individual regions of the world can be contested. I will focus on those points that Gates has made with regard to the region that falls within the area of my expertise: the foreign, defense and security polices of Russia, which Gates views as one of the most important challenges the U.S. faces, dealing with which requires the development and implementation of long-term strategies.

I agree with Gates’ assessment that U.S. and NATO military action in Kosovo set a dangerous precedent that any state or states could intervene in the internal affairs of another, making China and Russia concerned that the same rationale used by the West to intervene in Kosovo might be used against them in Tibet and Chechnya, respectively. I also agree with the author that the attempts by the Bush Jr. administration to bring Ukraine and Georgia into NATO were “overreaching” and backfired. Gates rightly asks: “Had Georgia been admitted into full NATO membership and invoked Article 5, would the United States and the other allies actually have been willing to send forces to assist in a doomed effort?” “Absent a threat to American vital interests, we should avoid intervening with U.S. military forces in places where another power has overwhelming advantages in proximity, numbers, and logistics, and cares a lot more about prevailing than we do. This was clearly the case with Russia in Georgia and Ukraine,” he writes.

Gates is also brutally honest when admitting flaws in both the U.S. response to the war in Syria and the Obama administration’s forecast of consequences of Russia’s intervention in that war. “Presidents should avoid ultimatums and red lines unless they are fully prepared to intervene militarily to enforce them. Obama’s red line in Syria and his failure to follow through had significant repercussions, and not just in Syria,” he writes. “The Obama administration crowed early on that Russia was making a strategic mistake by getting so deeply involved in Syria and that it would find itself in a military quagmire. The administration was mistaken. As of this writing, the Russians have kept their military involvement modest. Thanks to Russian and Iranian help, Assad was able to reestablish control over much of Syria,” he writes.

However, while I also largely agree with Gates’ analysis of the outcomes of Bush Jr.’s campaign to bring Ukraine and Georgia into NATO and of Putin’s intervention in Syria, I cannot agree with Gates’ repetition of a talking point that remains popular inside the Beltway that Russia has no allies. Calling other great powers’ allies “clients” while describing one’s own allies as “allies” is akin to the Russian habit of calling its own spies “intelligence officers” while calling foreign countries’ intelligence officers “spies”: different terms, same semantics. Last time I counted, the Moscow-led Collective Security Treaty Organization had six members, including Russia itself, but also Armenia, Belarus, Kazakhstan, Kyrgyzstan and Tajikistan, and its charter explicitly refers to its members’ “all-round allied relations in foreign policy, military and technical areas, as well as in the sphere of counteraction to the transnational challenges and menaces to the safety of states and peoples.” Nor can I fully share Gates’ skepticism that a Marshall-like plan for newly-independent Russia could have facilitated its transformation into a Western-style democracy. It is true that some Western financial aid had been stolen in the 1990s, but in my view, incremental disbursement of financial aid (rather than loans, which made up the bulk of what Western powers gave Russia in the 1990s) that would have been made conditional on meeting specific reform goals could have eased Russia’s rough transition to the market economy and facilitated its integration into the Western club of free market economies. Not only Boris Yeltsin, but Vladimir Putin too, during the initial years of his rule, repeatedly inquired about Russia’s membership in the EU and NATO. In fact, Gates himself points out that, perhaps, the U.S. could have done more to encourage Russian progress toward full membership in the Western clubs. “Should more serious consideration have been given to offering MAP to Russia as encouragement for political and economic reform, and to signal a willingness to eventually include Russia in European security arrangements? The obstacles would have been great, perhaps insurmountable both conceptually and politically, but I think we should have tried,” he writes.

There are also some important nuances that I wish Gates had not omitted from his analysis of specific key episodes in America’s relations with Russia. For instance, Gates cites how “extraordinary diplomacy” under George H. W. Bush facilitated the liberation of Eastern Europe and the end of the Cold War as an example of how non-military power should be used. That’s a valid point, though it is also worth noting, perhaps, what the Soviet Union itself did to dig its own grave, such as its failure to abandon the grossly inefficient model of planned economy and disproportionate geopolitical ambitions.

In addition, when describing Vladimir Putin’s furious reaction to Hillary Clinton’s remarks in the wake of the 2011 parliamentary elections, Gates cites one part of her remarks that perhaps irked the Russian leader less, while choosing to exclude the strongest part, in which she asserted that “Russian voters deserve a full investigation of electoral fraud and manipulation.” Gates also choose to ignore wide-spread claims of fraud during Boris Yeltsin’s 1996 re-election, attributing his victory to his “own political skill, strong support from the media, support of key oligarchs” and Bill Clinton.

These contestable points set aside, Gates’ assessment of U.S.-Russian relations after the end of the Cold War and Russia itself is much more solid and sound than that of some other former senior U.S. government officials who squarely focused on post-Soviet Eurasia in their government work. As important, Gates, unlike some of these experts, concedes that the U.S. is yet to craft a strategy of how to deal with Russia. That such a strategy is lacking even though it is much needed, I fully agree with. The incoming Biden administration would do well to consult Gates’ book for crafting its foreign policy strategy, especially when it comes to deciding when whether and when to use military means to attain desired ends.

Simon Saradzhyan is the founding director of Russia Matters.

Photo by Pete Souza shared under a Creative Commons license.

The opinions expressed herein are solely those of the author.

Will Russia’s Upcoming Duma Elections Change Anything At All?

Russia’s Response to US Withdrawal From Afghanistan: Criticism of US, Concerns About Security Environment

Why the US Should Rethink Its Russia-centric Ukraine Policy

Twenty Years After: How Terrorism and the World have Changed Since 9/11

Center for the National Interest

Could SCO Fill Void Left by US in Afghanistan?

Russia is Building a Plane for Nuclear Doomsday

Nye and Chernenko on Whether the United States, Russia Can Agree on Cyber