The share of Russians relying on television as a main source of news continues to decline, while the number of those who depend on social media or internet publications for news is on the rise. Although Russian social media sites remain popular, Russian usage figures of non-Russian sites with video capabilities such as YouTube, Instagram and TikTok are growing at significantly faster rates. These factors present worrying trends for the Kremlin, which depends heavily on television and a controlled information space to broadcast its message to the Russian public.

Russia’s leading independent pollster, the Levada Center, surveyed 1,600 individuals in 137 settlements across 50 regions of Russia on Jan. 29-Feb. 2, 2021, and found that 64 percent of Russians cited television as a source from which they most often learn about news. This figure, while the highest of all listed media, has been in steady retreat since Levada began asking the question in August 2009. Meanwhile, over the same time period, Levada found that both social networks and internet publications greatly increased in popularity as news sources. Throughout much of 2020, percentages for reliance on both of these forms of media had remained stagnant; these latest figures thus represent a jump upward beginning in 2021. 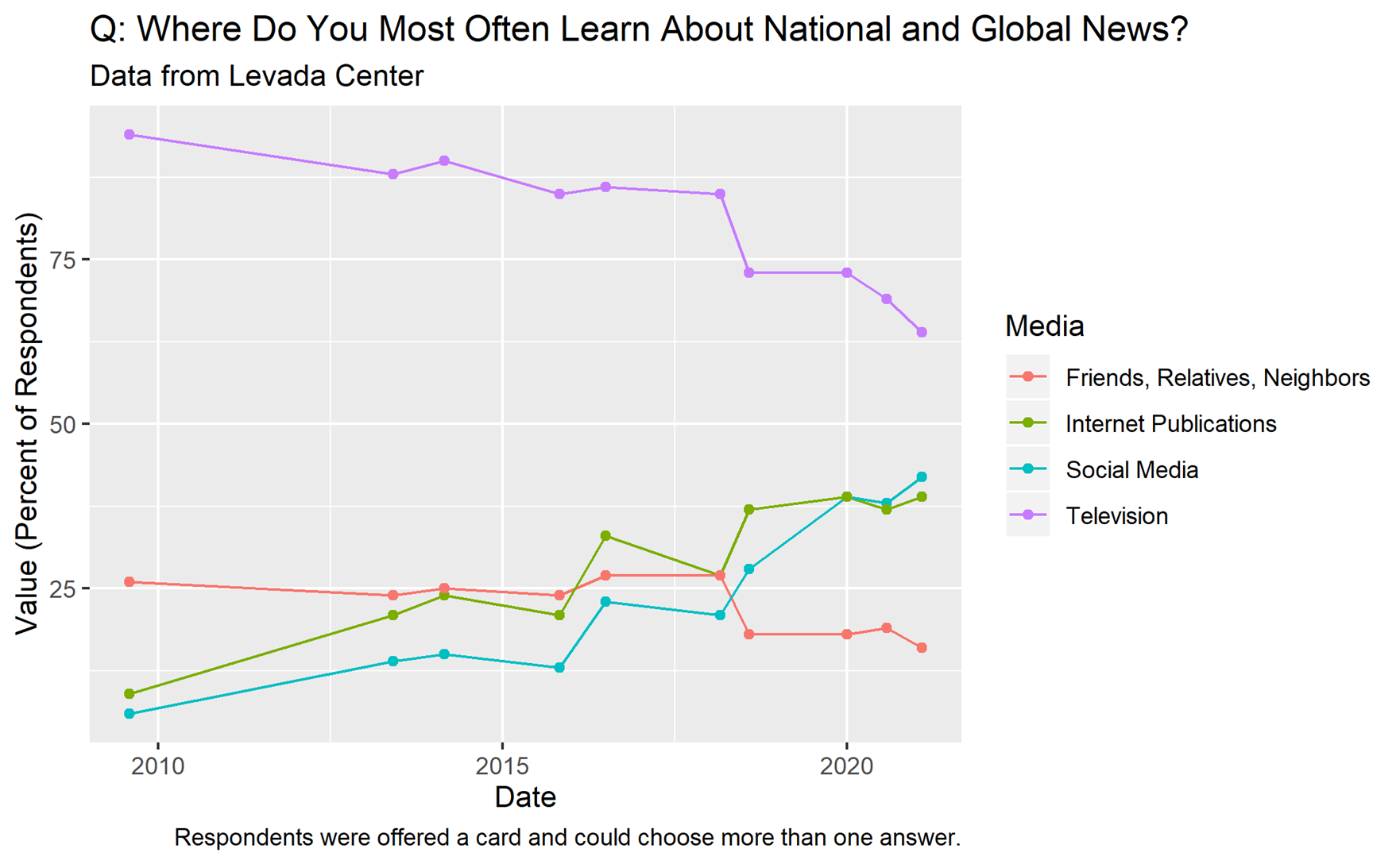 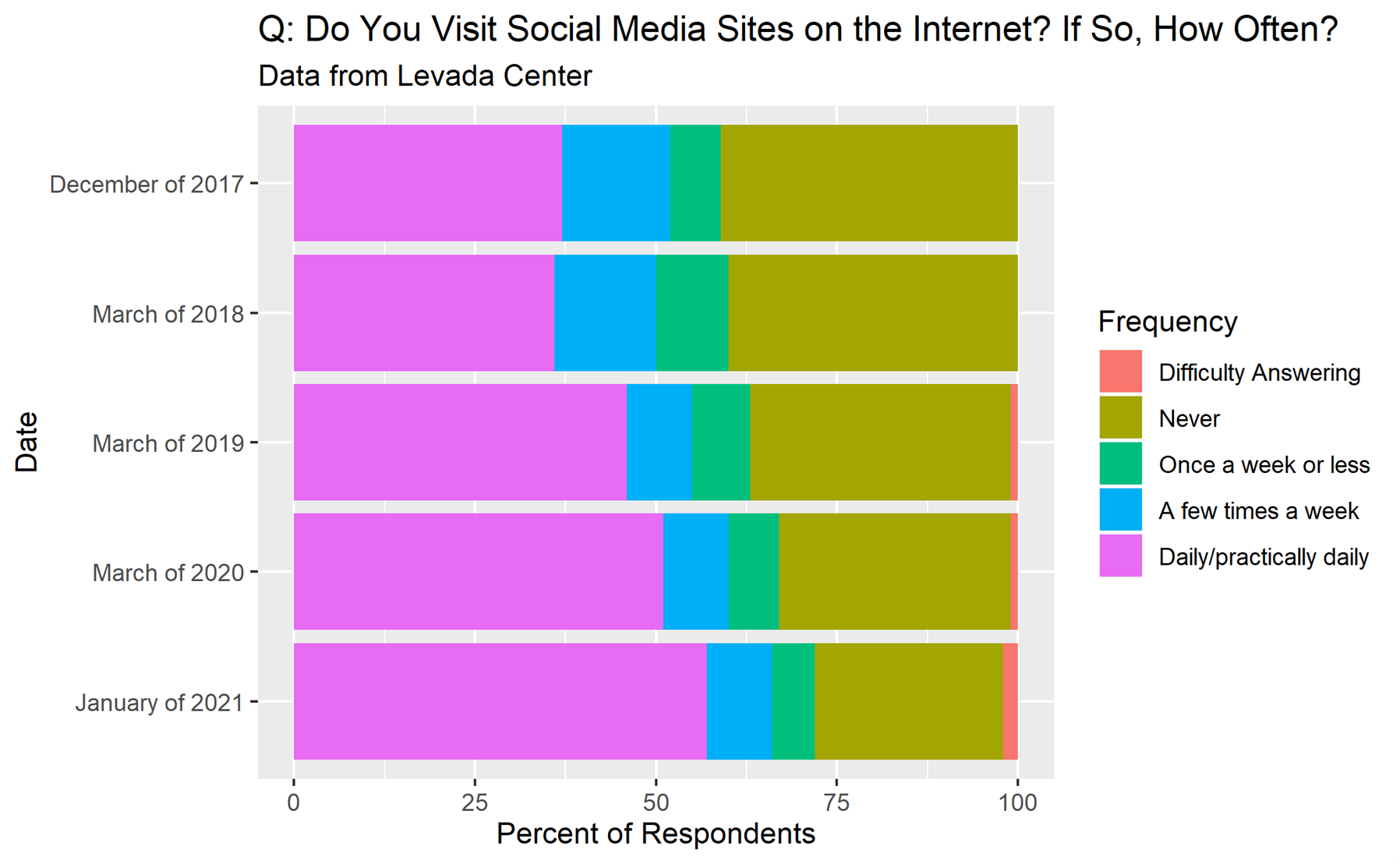 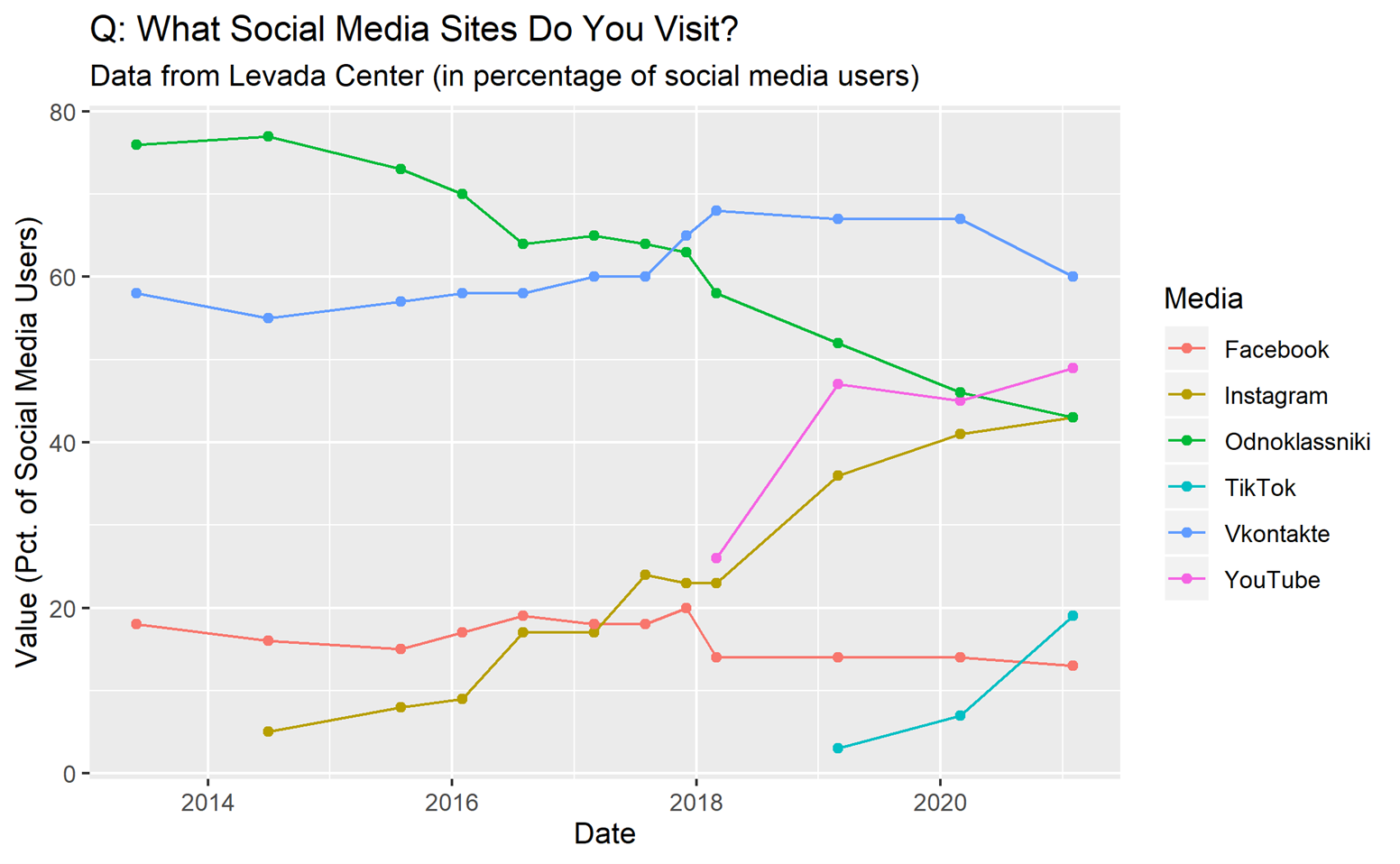 One notable aspect of these results is how Russian social media sites such as Vkontakte and Odnoklassniki are swiftly declining in relative popularity compared to their non-Russian competitors. While Vkontakte remains the most popular social media site in Russia, non-Russian social media such as YouTube, Instagram and TikTok are growing at significantly faster rates, and sites like Odnoklassniki are steadily declining in influence. Trends like these stand in sharp contrast to the Russian government’s push for greater isolation of the Russian internet space.

Denis Volkov, Levada’s deputy director, argues that it is not just the pure growth of these platforms that are worrying to the government, but also the fact that they come equipped “with video content (YouTube, Instagram and now TikTok)” and can thus “compete with television … [and] make it possible to learn about alternative positions and opinions.” Volkov argues that the growth of social networks such as these has caused the Russian information environment to “become more diverse over the last two or three years, despite censorship on television and the increasing pressure of the state on society.”

Meanwhile, Timothy Colton, professor of government at Harvard University, believes that “these numbers update our picture of the ongoing shift in Russia’s communication landscape without fundamentally changing it. Russia is undergoing what many other countries have experienced with the transition from analog to digital media and from national to transnational messaging. The challenge to traditional methods of state control is an obvious one.” In Colton’s view, however, “experience shows that the Kremlin will respond not only with registration requirements and bans but by maintaining a large and often highly sophisticated presence of its own on the new media, including YouTube.”

Daniel Shapiro is a graduate of Harvard University specializing in contemporary Russian politics, Russian public/private sector relations and the North and South Caucasus. He is also an associate with Russia Matters.

Photo by Today Testing shared under a Creative Commons license. The opinions expressed herein are solely those of the author.

The Dilemma Over the Nord Stream 2 Pipeline

Russians Largely Blame US, NATO Allies for Escalation of Tensions Near Ukraine