Military Assets in the Arctic: A Russia-West Correlation of Forces

For now, the risk of a standoff between Russia and NATO in the Arctic remains low. However, should military tension increase in the region, naval assets and overall military deployments would largely play in Moscow’s favor in the European Arctic and in Washington’s in the Pacific Arctic.1 In the European theatre NATO members and their partners Sweden and Finland have limited Arctic-capable military forces present and reinforcements would take a long time to arrive from the other side of the North Atlantic. Naval assets on both sides are generally ill-fitted for genuine ice conditions, which limits the scope and the nature of operations in the region. Moreover, the Kremlin would likely seek to remove military tension from European Arctic waters as quickly as possible toward the North Atlantic, which would increase pressure on NATO to defend the North Atlantic sea line of communication (SLOC) and ensure access to the Baltic Sea.

With climate change making the Arctic navigable for more weeks of the year, and with Russia-West relations remaining tense, the region is no longer an exceptional area of cooperation insulated from wider security issues. As a result, the eight coastal Arctic nations—Canada, Denmark, Finland, Iceland, Norway, Russia, Sweden and the U.S.—will increasingly have to enforce military security alongside the enduring spirit of soft-security cooperation. As military “rules of the game” in the Arctic have not yet been properly defined, this situation holds the risk that miscalculation and tactical errors could escalate dangerously. Creating a military code of conduct for the Arctic, and including Russia, would be a way forward, especially because keeping the Arctic as a “low-tension” environment still is in the interest of Arctic nations. Meanwhile, NATO, Sweden and Finland can do a lot to wake up to the Arctic as a potential area of operation and catch up to recent Russian military deployments. 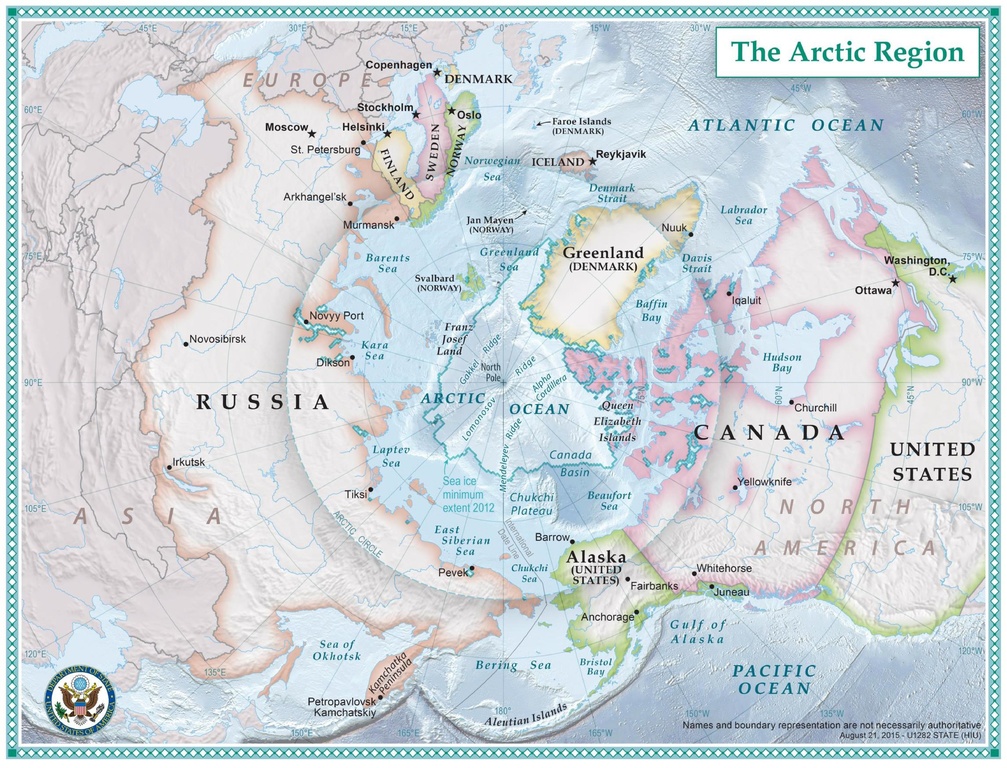 Correlation of Forces in the Pacific Arctic

For Washington, military tension in the Pacific Arctic would have a greater impact for national security than in the European part. For Canada, the situation is similar, with a priority on upholding sovereignty and unhampered access to the Northwest Passage linking the Bering Strait to Greenland along the Canadian Arctic coastline. Russia’s Pacific Fleet remains a formidable opponent, and recent military reinforcements in the Sea of Okhotsk and the Kamchatka peninsula could become a problem for the freedom of access and military operation of U.S. naval assets. Russia’s Pacific Fleet comprises fewer than 20 active submarines (roughly one-third of Russia’s sea-based nuclear deterrent), large surface vessels (including one guided missile cruiser) and powerful air defense systems. However, the United States could count on available assets in the 3rd Fleet (East Pacific) and the 7th Fleet (West Pacific), with potential reinforcements from Canada. Correlation of forces, depending on deployment time to theater in the North Pacific, largely plays in the United States’ favor.

Russian Forces in the European Arctic

A quick comparison of forces shows that Russia has clear military superiority in European Arctic waters. Moreover, Moscow clearly sees the High North as a strategic as well as an operational priority, having created a new, full-fledged military district for the Arctic in late 2019 and an electromagnetic warfare center for the Northern Fleet last May.

Although lacking modern surface combatants, the Northern Fleet—Russia’s key military presence in the Arctic—has been adapted with lighter surface vessels equipped with standoff missile systems (P-800 Oniks and Kalibr-NK mostly). Among other available assets, it can count on one Kirov-class nuclear-powered guided-missile cruiser, one Slava-class guided-missile cruiser, one Gorshkov-class frigate, up to four Udaloy-class anti-submarine destroyers and one recently deployed diesel-electric icebreaker. The fleet of deployable submarines, although ageing, is still a force of six to seven ballistic missile submarines (SSBNs), four active cruise missile submarines (SSGNs) and eight to nine nuclear-powered attack submarines (SSNs), two to four special mission submarines (SSANs) and up to five conventional attack submarines.

With assets mostly concentrated around Arkhangelsk and on the Kola Peninsula, the Northern Fleet hosts three naval formations, the 45th Air and Air Defense Army and the 14th Army Corps (including the Arctic Brigade with the 80th and 200th Separate Motor-Rifle Brigades). The Northern Fleet alone can organically generate up to six battalion tactical groups (BTGs) scattered around the Kola Peninsula—four ground-based and two from naval infantry.2 Special forces units are generated from the 61st Red Banner Naval Infantry Brigade. Ground troops are mostly used for the protection of the coastline of Russia’s Arctic zone as well as facilities and infrastructure located there.

Meanwhile, Russia’s armed forces have recently focused their training on amphibious coastal assault capabilities, air defense systems in the region and combined arms operations between naval and air forces. The Russian armed forces operate a relatively disparate network of bases and air strips across the country’s Arctic zone, with military infrastructure there serving both military and civilian purposes, notably for search and rescue operations, radar coverage and domain and situational awareness.

In case of regional military tension or a standoff, the Kremlin’s strategy would likely seek to move away from Arctic waters as quickly as possible toward the North Atlantic. Moscow’s regional strategy encompasses out-of-area sea denial through defense in depth in order to remove any military tension from the Kola Peninsula,3 which hosts two-thirds of Russia’s sea-based nuclear deterrent. This would increase pressure on NATO to defend the SLOC, which is paramount for freedom of operation and navigation in the North Atlantic. This would also potentially hamper access to the Baltic Sea in terms of reinforcements as well as create a contested environment toward the Greenland-Iceland-United Kingdom gap in the northern Atlantic Ocean. Perimeter defense is ensured by multi-layered air defense and coastal defense capabilities around the Kola Peninsula.

NATO and Nordic Allies in the European Arctic Theater

As noted above, for NATO and its Nordic allies Sweden and Finland the correlation of forces in the European Arctic is clearly not in their favor vis-à-vis Russia due to limited Arctic-capable military forces and the long road for reinforcements. Readily available military assets in theater are limited to Norway’s three to six Ula-class attack submarines, two to four Fridtjof Nansen-class destroyers and a few other surface assets for patrol and coastal operations (patrol ships, mine countermeasures vessels and landing platforms) along with some multi-role fighters (F-16s). Denmark could contribute its two to three Iver Huitfeldt-class destroyers and two to four Thetis-class frigates, plus several squadrons of F-16s. Out-of-theater NATO assets would include reinforcements mostly from the United States (in the form of carrier strike groups with naval and air superiority assets—if they arrive in time—and limited air support from the Keflavik naval air station in Iceland), the United Kingdom (air superiority assets and potentially mobilizing the Joint Expeditionary Force under U.K. command) and France (naval assets). Non-NATO assets, provided they are dragged into an Arctic conflict, would be composed of Finnish and Swedish air superiority assets as well as their respective fleets of patrol and coastal assets, on top of two to four Swedish attack submarines.

In terms of military posture, Norway would be the most affected by Russian regional activity. Oslo’s priority in war fighting would be to ensure full sovereignty over the Svalbard archipelago, while pushing back on land and at sea through counter-sea denial and air superiority (including against Russian air defense systems and electromagnetic warfare assets). Denmark’s role would be instrumental in keeping the North Atlantic SLOC open as well as protecting the Danish Straits, in the Baltic Sea, in case of horizontal escalation from one military theater of operation to another. Iceland would provide support for U.S. air operations and carrier groups logistics, should a protracted conflict involve a U.S. naval presence. The United States and Canada would have to first determine their willingness to intervene in a European Arctic military engagement against Russia—all the while considering the national interest and deployment time to theater. Non-NATO members Sweden and Finland would de facto be involved—Sweden protecting the SLOC and ensuring Baltic reinforcements, and Finland potentially fighting on land against Russian troops and pushing back against air defense and electromagnetic warfare systems.

The Arctic as a potential area of military tension is fraught with risks. This is especially true today as Arctic security does not work in a vacuum and is no longer protected from global security challenges, especially because of the impact of climate change and from strained relations between Russia and the West. Upholding “low tension” in the High North and keeping the Arctic an exceptional area of practical cooperation require continued willingness to do so.

The military imbalance in the Arctic is compounded by the fact that NATO, its Nordic allies and Russia have not (yet) properly defined hard-security “rules of the road” in the High North. This in turn heightens the risk of miscalculation and the potential for tactical errors, especially since increased human activity caused by climate change will undoubtedly lead to more incidents at sea. This is true for both civilian and military activities.

Another risk is linked to China, which has officially declared itself a “near Arctic state,”4 as Beijing could create pressure on Arctic coastal states and push for advantageous economic deals in terms of access and commercial operations, especially in Greenland and Iceland.

Several opportunities can help mitigate the aforementioned risks. A priority would be to create a military code of conduct for the Arctic.5 It is vital to define what is deemed tolerable and acceptable military practice in the region, and what isn’t. This could in turn increase the willingness to expand already existing security and life-at-sea measures, promote transparency and decrease the risk of miscalculation. (Some existing measures have been formalized within the Arctic Coast Guards Forum and the Arctic Security Forces Roundtable, for instance.) As Russia will take over chairmanship of the Arctic Council between 2021 and 2023, this might be a good time to push for such cooperative arrangements in military security affairs.

Another opportunity relates to strengthening overall awareness among NATO and its partners Sweden and Finland that the Arctic might become an area of military operation. As an alliance, NATO is slowly but steadily waking up to the Arctic. Much remains to be done, however, in terms of overall domain and situational awareness beyond the North Atlantic—although without over-reaching in terms of capabilities and over-reacting to potential risks

Mathieu Boulegue is a research fellow with the Russia and Eurasia Program of Chatham House – The Royal Institute of International Affairs.

The opinions in this article are solely those of the author.