The Dark Arts of Disinformation Through a Historical Lens 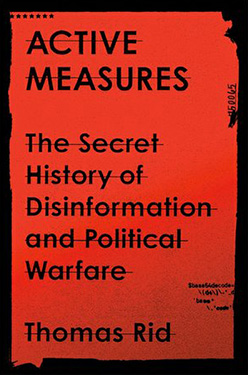 History matters because sometimes it repeats itself. In his pioneering analysis of modern disinformation warfare from a historical perspective, Dr. Thomas Rid posits from the outset that “only by taking careful and accurate measure of the fantastic past of disinformation can we comprehend the present, and fix the future.” When a political scientist writes a history book, you should still expect, if not a mid-range theory, then at least a thesis with a normative conclusion of recommendations for policy-making or problem-solving. Rid’s timely book on the history of “active measures” by Soviet and post-Soviet Russian special services, along with those of other Eastern bloc and Western countries, is no exception. Rid writes that the merger of new technologies and the old school of strategic deception have made it “easier than ever to test, amplify, sustain and deny active measures, and harder than ever to counter or suppress rumors, lies and conspiracy theories.”

“Active Measures” offers over a dozen case studies, organized chronologically, of operations run by disinformation warriors in the past hundred years. Rid weaves the historical canvas from a vast array of primary sources, mostly from the declassified documents of the U.S. Central Intelligence Agency as well as from the archives of East Germany, Czechoslovakia and Bulgaria, along with numerous secondary sources. If previously narratives were scattered throughout the memoirs of spymasters, the accounts of Soviet, Russian, Eastern bloc intelligence defectors and archival documents, now students of psychological warfare can find the outstanding cases in one volume, making it a "must-read,” in my view. Given Rid’s German background and that he teaches classes in information security at Johns Hopkins University, it should not be surprising that the most convex and detail-rich vignettes are about the operations of the East German Ministry for State Security (Stasi)1  and the more recent cases of Russian hacking and data leaking intended to weaken the targeted adversaries.

Although Soviet and Russian operations are thoroughly researched and evidenced, they contain some vexatious inaccuracies in the use of primary sources. For example, Rid asserts that at a March 1992 meeting with students of the Moscow State Institute of International Relations (MGIMO), “Primakov revealed that the AIDS story was ‘created in the cabinets of the KGB’ and had simply aimed to distract from the Red Army’s use of chemical weapons.” A quick fact-check of the reference reveals that Yevgeny Primakov, then the head of Russia’s Foreign Intelligence Service (SVR) did not say a word about “the Red Army’s use of chemical weapons” mentioned in that MGIMO meeting.

More critically, I was least convinced by Rid’s claim that “the U.S. intelligence retreated from the disinformation battlefield almost completely … [w]hen the Berlin Wall went up in 1961 … and the West deescalated as the East escalated.” As evidenced by Alvin Snyder, United States Information Agency (USIA) veteran, the political warfare didn’t subside. On the contrary, I believe that it was on the rise in the 1970s and 80s. This is also confirmed by former U.S. Defense Secretary Robert Gates: “Most importantly, contrary to conventional wisdom, the Carter administration turned almost from the outset to CIA to carry out covert actions … Throughout that year and the next, CIA was asked to step up its activities targeted inside the USSR.”

Moreover, a case in the history of the Cold War that, in my view, fits Rid’s definition of the political warfare is conspicuously omitted: the story of U.S. President Ronald Reagan’s Strategic Defense Initiative (SDI). The U.S. president seemed to have genuinely believed the so-called Star Wars program could defend America from ballistic missiles, but some saw it as a disinformation ploy against America’s Cold War archenemy. The New York Times reported in 1993 that “the scheme deceived not only the Kremlin, but Congress, defrauding the American people of billions of dollars that could have been spent on real defense and domestic programs.” In addition, Oleg Gordievsky, a Soviet defector, wrote that it was a “large-scale disinformation operation” designed to force the Soviet negotiators into making concessions. One could argue that this political warfare operation was one of the most successful of the 20th century because it achieved its goal: the Soviet leadership fell for it, hook, line and sinker.

Rid’s lucid text reaches its crescendo when he gets to modern day active measures, as they are in his domain of cybersecurity. It is in the last pages that he makes the most compelling arguments for why history matters. Sometimes it repeats itself. Take the 1950s highly professional and effective CIA operation LC-Cassock, for example. It was a forgeries factory aimed at East Germany, an echo of a now more farcical and sloppy version—the Internet Research Agency (IRA) in St. Petersburg, also known as the “troll factory.” Rid convincingly demonstrates why the troll factory was not effective in terms of its impact on 2016 U.S. voter preferences when measured by any matrix. “It is unlikely that the trolls convinced many, if any, American voters to change their minds: the overall volume of IRA activity [on Facebook] was lower than reported; a lot of the activity was audience-building; only 8.4 percent of IRA activity was election related, and the Russian messaging mostly stayed within echo chambers,” Rid writes. “On Twitter, the IRA’s impact practically vanished in the staggering number of election-related tweets … [t]he troll den generated less than 0.05 percent of all election-related posts. The IRA, according to the data released by Twitter, boosted candidate Donald Trump’s retweet count with only 860 direct re-tweets over the entire campaign.” And yet, Rid writes, “the House Democrats’ release of the Facebook ads turned the ads, and the trolls’ wider Facebook outreach, into a spectacular disinformation success story.” And the overreaction by “the mainstream press generated the actual effect of the disinformation operation.”

The volume is replete with many other lessons from the history of active measures. Deniability and the ability of intelligence agencies to learn from each other’s “best practices” to surprise the opponent with a new modification of the mutated virus-like disinformation operation stand out among others. One example is Schlagzeug, the CIA-funded popular jazz magazine that featured one or two subversive articles targeting East Germans. Then, in 1958, the Soviet disinformation operators forged the CIA’s own forgery, Schlagzeug, to disseminate Moscow’s messages in West Germany.

Yet the most important merit of the book is in nudging the reader to think what’s next in this conflict. As a specialist in conflict management, I inferred from reading “Active Measures” that there are essentially three options: 1. do nothing; 2. retaliate in an eye-for-an-eye replay of Cold War-era active measures; or 3. negotiate a new arrangement and set of rules.

The first option is the worst thing that can happen in a world facing epidemiological, climate change, cyber-terrorism and nuclear proliferation challenges. In the second option, if the U.S. were to play Russia’s game by escalating retaliatory “political warfare,” this would hardly assure a clear victory as the entire world could go blind through unintended consequences, as manifested by the Shadow Brokers case of the devastating leak of NSA hacking tools. The third option, however, is still possible. In fact, it has happened before. Alvin Snyder noted that in 1987, Soviet leader Mikhail Gorbachev told Charles Wick, the director of the USIA, “No more disinformation. I don’t want politicians and bureaucrats creating all these tensions anymore, disinformation and all that. It’s going to be a new day.” Wick, in response, suggested that there should be regular meetings between him and his counterpart, Alexander Yakovlev, “for the purpose of improving communication, reducing conflict and putting our information relations on a basis of truth, fact and reciprocity.”

But for the third option to materialize, it starts with understanding Russia today. In some limited ways it does resemble the besieged fortress of the Bolshevist Russia of the Operation Trust (1922-1927) days. In the words of George Kennan, it was the combination of Marx and Clausewitz that made Leninist Russia a formidable adversary. The Kremlin no longer has Marx in that combination, and it has no global mission of the Leninist scale. Putin’s defensive-aggressive Russia is less interested in running the world than in ensuring that other powers cannot or dare not attempt to thwart it. What’s missing now, therefore, is the political will of skilled leaders with realist mindsets to negotiate the norms and redlines in relations between the U.S. and its allies on one side, and Russia on the other. Whoever these leaders are going to be, Rid’s book will provide them and their staff with valuable analyses of how the combination of traditional active measures tools and technology can make the world even less predictable and even more dangerous.

Arthur Martirosyan, a senior consultant with CMPartners, is a negotiation specialist with more than 25 years of experience in designing and implementing strategic dialogue processes in ethnopolitical conflicts in Eurasia, the Middle East, the Balkans and Africa.

The opinions expressed in this article are solely those of the author.

The U.S. Failed to Execute Its Cyberstrategy—and Russia Pounced

Most Russians See Coronavirus as Top Event of 2020, Worry 2021 Will Be Tense

From Primers on How to Manage Relationship with Russia to Lessons of Karabakh War: RM's Most Read of 2020